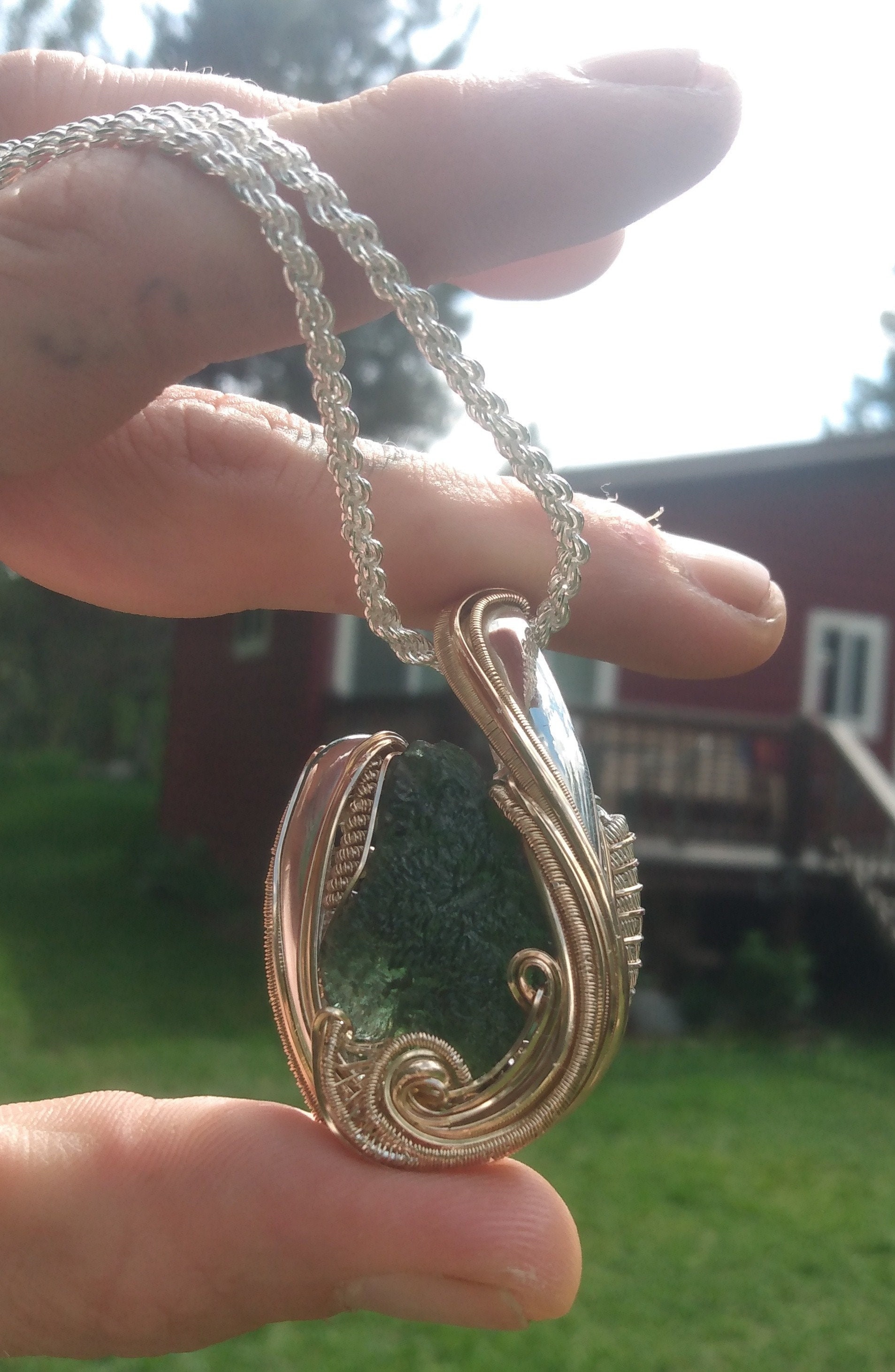 Featuring a 6.7gram AAA Moldavite 👽🛸👽🛸 wrapped up in sterling silver wire and 14/20 goldfill wire.
That fresh new new 🤩 let me know what you think in the comments below 👇 this piece is heavy and ready to bang some heart chakra!👽💚

Legends tells us that when Lucifer fell from heaven, Archangel Michael swung his sword at Lucifer’s crown an emerald fell out and hit the Earth. This legendary emerald was symbolic of the fall of humanity and also the key to humanity’s redemption. In Legend this emerald was the Holy Grail itself. This emerald that fell from the sky sounds very much like Moldavite itself. It is believed that this emerald was was then fashioned into a cup or bowl by another angel that served as the cup of the Last Supper.

“The stone that fell to earth was an emerald that adorned Lucifer’s forehead. It was cut into the shape of a bowl by a faithful angel, and thus the Grail was born. It was given to Adam before he was expelled from the Garden of Eden. Seth, Adam’s son, having temporarily returned to the earthly paradise, took the Grail along with him. Other people transported the Grail to Montsegur, a fortress in the Pyrenees, which Lucifer’s armies besieged in order to get the Grail back and put it into their leader’s crown, out of which it had fallen; but the Grail was allegedly saved by knights who hid it within a mountain.”

– Julius Evola
The Mystery of the Grail
(Please note that Julius Evola was an extreme proponent of fascism and a huge anti-semite and this is not an endorsement of his works or views either partially or entirely, but rather a demonstration of this idea Lucifer’s emerald falling to earth as the holy grail being discussed by a historical occultist, despite how vile his ideas were.)

I gladly accept returns and cancellations

Ship items back to me within: 7 days of delivery

Request a cancellation within: 24 hours of purchase

But please contact me if you have any problems with your order.

The following items can't be returned or exchanged

Because of the nature of these items, unless they arrive damaged or defective, I can't accept returns for:

0 items in your cart